We recently posted our favorite gender-neutral nursery color schemes and color trends in girls’ rooms, and we’re not talking about the tried and true pastel pinks and blues of yesteryear. The spaces featured modern, fresh and unique color ideas to really give you some serious inspiration. Today we’re going somewhere a little bit daring and a little bit dark and sharing some high contrast nurseries that feature the color black that we think would be perfect for a boy.

Black is definitely a controversial color when it comes to nursery design, but we’re here to prove to you that it doesn’t have to be that way. Any color can be used in a nursery as long as it’s used the right way, and if you ask us, high-contrast color palettes with black accents are certainly bold, but they’re also sophisticated, intriguing and oh-so-modern. Take a look at these nurseries to see some successful uses of the color black.

We love this black and white nursery with the chalkboard wall. It works because the dark accent is only on one wall while the others are bright white. With the addition of the white crib, white rug and light-colored glider, there’s no worry that this space will ever feel too moody. Plus, you can draw fun, colorful designs on the chalkboard wall! 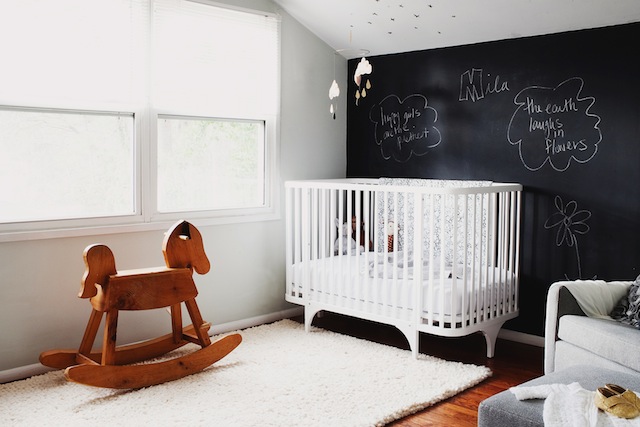 If you prefer to keep the black paint off the walls, how about choosing a black glider instead? The black and white color scheme in this modern nursery looks amazing when paired with geometric elements like stripes and zigzag patterns that add even more modernity to the space. A nursery can be modern without being stark—it’s all about balance.

We love the simple and chic design of this dark gray and red nursery. The natural wood-toned crib adds a subtle warmth to the space, while the red and white chevron curtains add a pop of color. The walls are painted dark gray in this nursery, but since one of them has a large window and the ceiling is white, the small space isn’t overwhelmed. 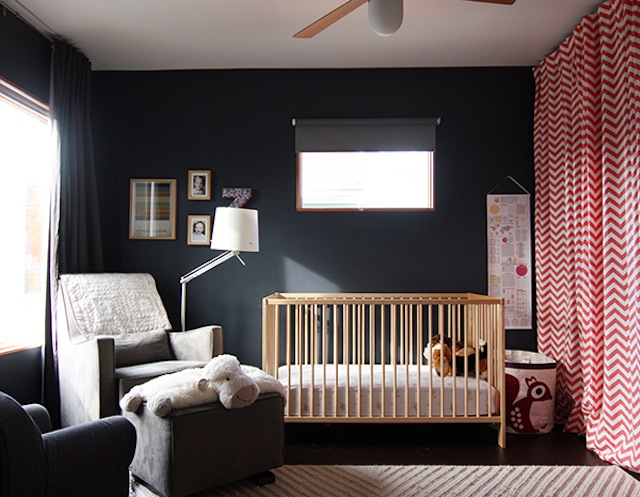 Still concerned about using the color black? You’re sure to be on the safe side if you have a space with a lot of natural light like this bright nursery. Even though it’s black and white, this space feels open, airy and cheerful—it’s proof that black doesn’t have to be dim and dark. 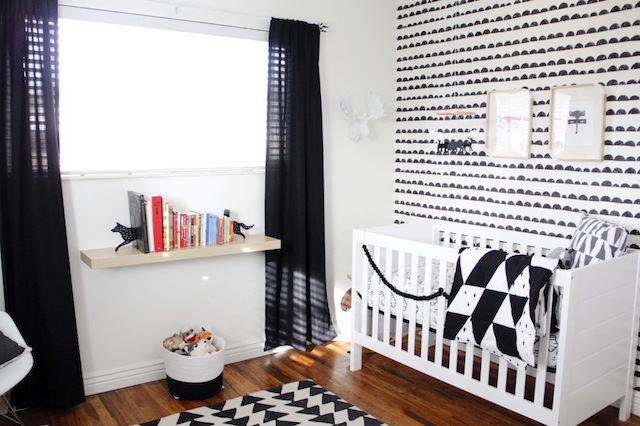 We especially love this black and white color scheme for boys’ nurseries, but if you want to alter it for a girl’s space, just throw in a pop of pink or Tiffany blue—it’s that simple!