We recently caught up with The Guncles—Bill Horn and Scout Masterson—and they shared their daughter Simone’s big girl room. Knowing they always have their hands in something creative, we dug a little deeper to see what other projects they might be willing to share. How fun to find out that they helped their friend Beverley Mitchell with her daughter Kenzie’s nursery!

Beverley is known for her roles in 7th Heaven (I’m pretty sure I saw every episode!) and The Secret Life of the American Teenager. She and her husband, Michael Cameron, recently celebrated Kenzie’s first birthday, and they were kind enough to show us around their daughter’s tranquil taupe and aqua nursery and let us in on where they shopped. You won’t believe what the couple discovered during Beverley’s baby shower (hint: be sure to read about the needlepoint artwork)! Here’s what she had to say about designing and shopping for the room. 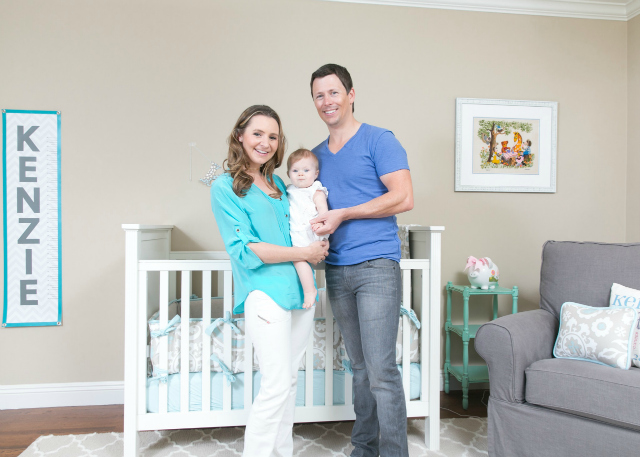 Personalized Growth Chart from The Bear and the Bug

I wanted something that was more neutral and calming. I am not much of a pink girl, but I love aqua, so we went more for a tranquil nursery. I hunted Pinterest and came up with a theme from there. Kenzie has Carousel Designs’ Taupe Suzani four-piece crib bedding set. 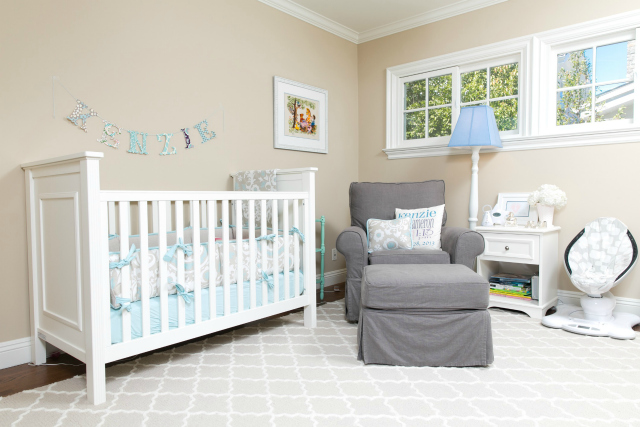 Merle & Velma made the personalized pillow with Kenzie’s birth details. It’s a fun way to remember the best day of our lives! 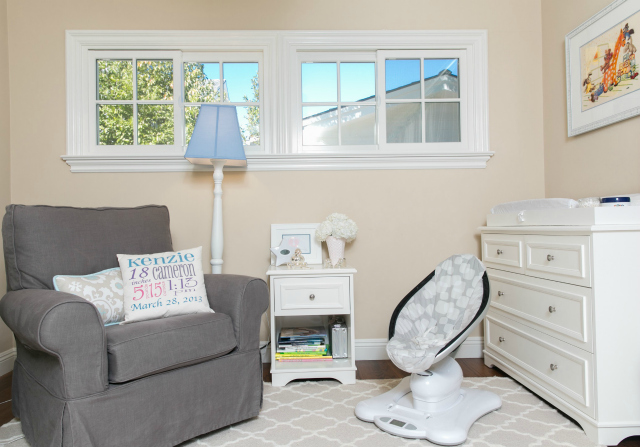 Kenzie’s toy box was a wonderful gift from our friends at Henson Consulting in Chicago. She loves her toy box—she goes right over and starts digging for her favorite toys. 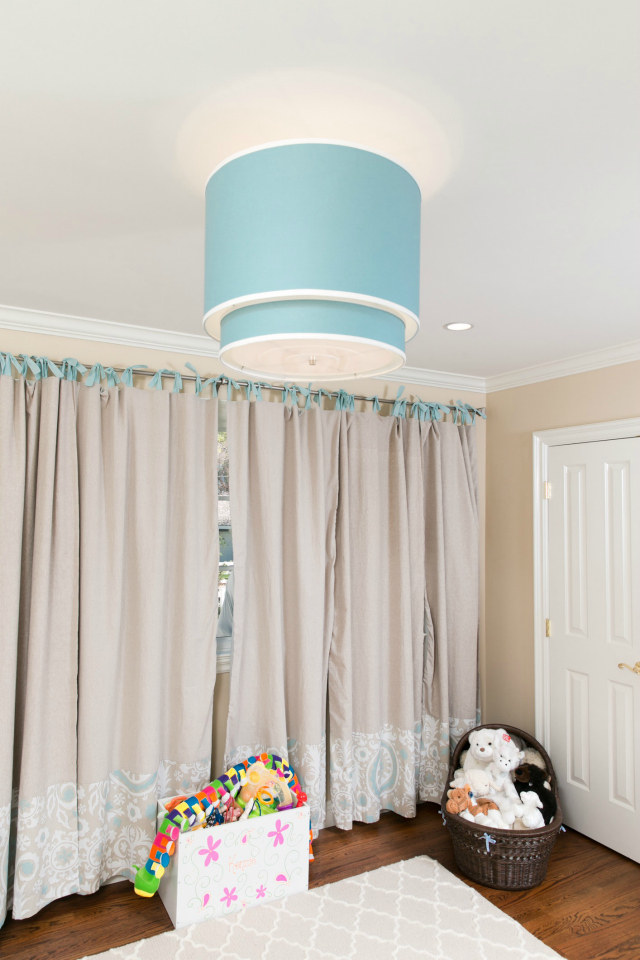 One of the needlepoints was in my nursery, and my great grandmother, Memo, made it for me. I wanted something from my childhood in Kenzie’s room, so my mom gave it to me at my shower. It reminded me that I knew Michael had a needlepoint as well, so I asked his mom if we could have it. When we opened it up, we were shocked. The needlepoint that his Aunt Annie made for his nursery had the exact same characters as mine! They actually look like a set. It truly was perfect, so I took them in and got them framed, and they are my favorite part of the nursery. They represent a little something special from Michael’s and my childhood that we get to share with our precious little girl. (The other needlepoint can be spotted in the first photo above the chair.) 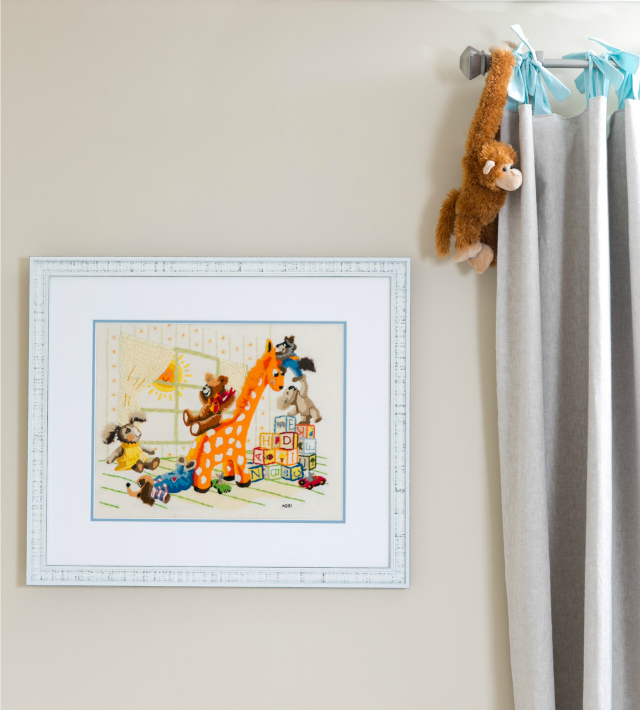 I was obsessed with Pitter Patter Print because I loved the idea of Kenzie’s birth announcement being personalized with her little footprints. I absolutely love how it turned out, and I will definitely be doing a little something special each year with her little feet! 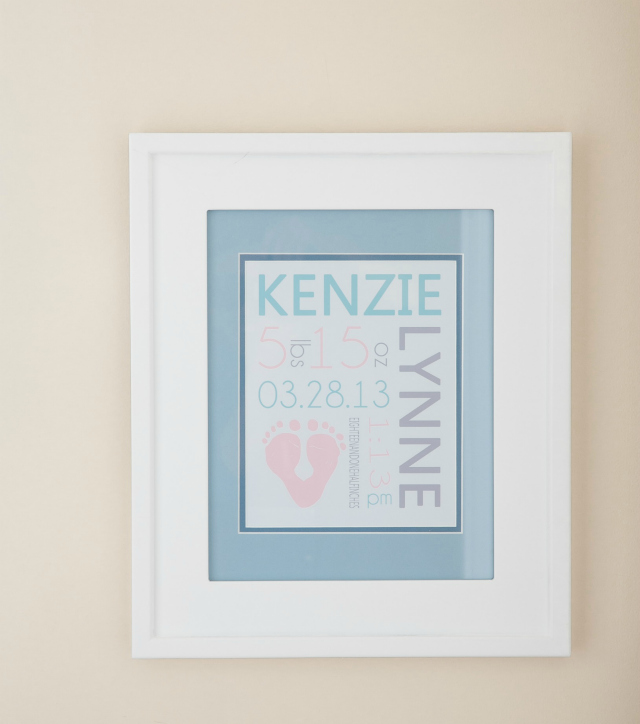 Bill and Scout are like my baby whisperers. I had no idea where to start and what I needed for the nursery, and they totally came in and just took over to make sure we had everything we needed. They not only helped design the room, but they also put the room together and handled all of the deliveries while I was at the hospital giving birth! 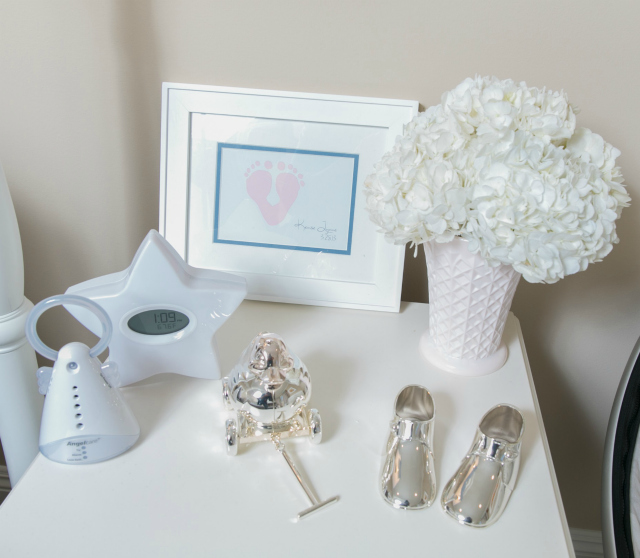 I think Kenzie loves her room! It’s hard to tell, but I know we love it!

Adrienne LaRocque, an Event Planner in Los Angeles, is passionate about creating a memorable experience when entertaining. She started Eventful Adrienne in 2013, where she offers "Parties with Personality!"

View all articles by Adrienne